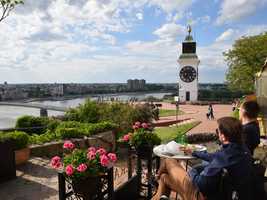 Novi Sad is the capital of the Autonomous Province of Vojvodina and the second city in importance in the country. Novi Sad is a remarkable place that should find its place in any itinerary of Serbia. Though not too old, Novi Sad has a beautiful city center with lots of hidden corners, scenic sights and culture to explore. Moreover, it lies on the magnificent Danube on whose other bank stands the Petrovaradin fortress, one of the largest baroque fortifications in Europe. Novi Sad is also known as a place of open-mindedness and tolerance where Serbs from all parts of ex-Yugoslavia, Hungarians, Slovaks, Ukrainians, and many other nations live side by side. It is a very dynamic place with bustling nightlife and festivals, of which the best known is Exit Fest, a large summer music festival that attracts hundreds of thousands of revelers and which has placed Novi Sad on the musical and tourist map of Europe. The city center square Trg Slobode once served as a shared marketplace for both the Catholic community, which resided to the west of it and the Orthodox community to the east. In the middle stands the monument to Svetozar Miletić, lawyer and politician, leader of the Serbs and their Liberal Party in Vojvodina and ultimately the mayor of Novi Sad. The monument is the work of great sculptor Ivan Meštrović. Behind the monument stands the city hall (Gradska kuća), a neo-renaissance edifice designed in 1895 by well-known architect Gyorgy Molnar. Facing the city hall stands the Catholic parish church of the Name of Mary which, from its size and appearance became popularly known as the Cathedral. On the north side of the square, there are three significant buildings: Hotel Meyer, Novi Sad Savings Bank and "Iron Man" Building. One the south side stretches the long green-yellow facade of the Hotel Vojvodina. Modena Street with its popular row of cafes was set out between the two world wars. On the other side of the street is the long red Tanurdžić Palace. Zmaj Jovina and Dunavska Street are definitely among the most beautiful pedestrian zones in the country, and although full of cafes and shopping places there are also preserved houses where some of the famous personalities of our history lived. At the junction of the Zmaj Jovina and Danube Street, there is also the Bishops Palace also built during the 19th century which has always attracted the attention of the tourists. Walking in the center is worth ending with a visit to the Danube Park where you will be welcomed by many greenery, beautiful lake peace, and respite. Novi Sad is increasingly distinguished by catering facilities that are colored with a certain theme that either preserves the spirit of old times or is dedicated to a writer or cultural direction and therefore tourists consider this city as charming.
Show more